Early March was COLD. The kind of cold that my toddlers don’t last long outside in because they refuse to wear mittens. They soldier through holding onto the cold chains of swings at the park for about 10 minutes before they tap out.

Although it was still on the colder side one particular day, finding another indoor play activity wouldn’t allow us to soak up some needed sun. The kids and I needed to get OUT of the house and do something a little different. 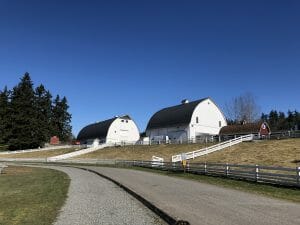 Visiting Kelsey Creek Farm in Bellevue with my kids had been on my to-do list for several months. Our plans to go had been scrapped several times because twins, nap schedules, and a finite mental bandwidth are real things! Heading to Bellevue from Seattle with three kids ages four years and younger, with lunches and snacks, water bottles, diapers, etc. took a little extra preparation but we finally did it. I only wish I would have gotten my, well…self, together sooner on this!

Kelsey Creek Farm is truly a treasure, and it’s open 365 days a year. It is part of the 150 acre Kelsey Creek Community Park run by Bellevue Parks and Recreation. The park includes forests, wetlands, creeks, grassy areas, and miles of walking trails. On the farm you will find large historic barns, and white fences that couldn’t be more charming. And, let’s not forget the animals – cows, horses, goats, sheep, pigs, and chickens! The best part is that it’s FREE to visit!

I first visited Kelsey Creek Farm back in the early 2000’s when I was nannying a little boy in Bellevue (more about THAT nanny job here). It quickly became one of our favorite outings and we made a point to visit Kelsey Creek Farm on a regular basis.

The weather couldn’t have been more beautiful on the recent day we went. As the weather transitions to spring in the Seattle area, the sun gives you a certain energy. My kids were definitely feeling this and hit the ground running once we unloaded everyone from the car. I immediately questioned my choice (and also my sanity) to leave the stroller behind for this outing, took a deep breath, swung the backpack over my shoulders, and let the adventuring begin!

Adventure #1: Parking lot to the farm

A small bridge over a creek was our first stop. When something captures the attention of my twin toddlers and four year old all at once, it must be good! 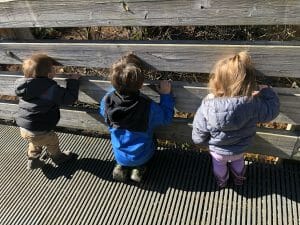 This moment of stillness didn’t last for too long, however. On the other side of the bridge we discovered a statue of a bird on a rock that everyone needed to climb on. Obviously that’s what it’s there for 😉 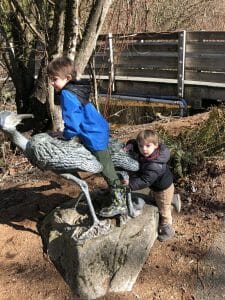 We continued our walk along the path through the park toward the farm. The kids loved exploring and hiding behind trees from one another along the way.

We made a quick stop at the bathroom (there are only port-a-potties available near the barns), where my twins tried their hardest to adopt two abandoned/lost stuffed animals near the water fountain. Luckily I was able to distract them and divert their attention to a nearby map of the park. 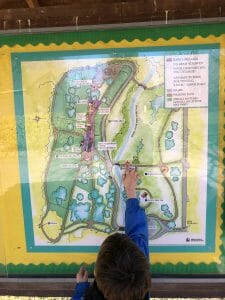 We checked out some of the upcoming activities happening at the park. I made a mental note that my 11 year old is almost of age to muck stalls 🙂 (kidding not kidding – I started doing this when I was about six years old!) But really, I’m guessing painting with chickens could reach cult status much like yoga with goats has. You can learn more and register for these at https://parks.bellevuewa.gov/community-centers/kelsey-creek-farm. 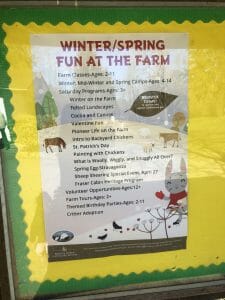 After the signs we were almost to the farm! Surprisingly, the kids didn’t want to head to the barns first. They were drawn to the pasture areas to the left of the barns. We headed up and over the hill where we spotted our first animal – a cow! He was grazing on the far side of the field, but they were excited nonetheless. 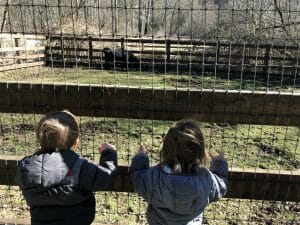 We moved on in search of more animals. Part of the fun being at the farm was running down the paths! 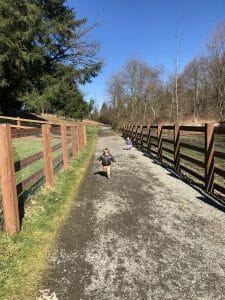 We hit the jackpot on the next stop. The horses were out enjoying the warm weather right near the fence line! One was close enough to pet. The pony was only slightly larger than our Great Dane, so my kids greeted it without hesitation. 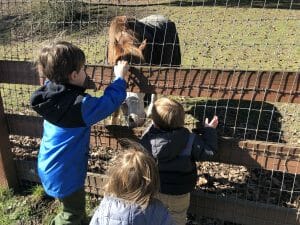 We stayed here for quite a while. For so long, in fact, that I texted my husband and told him we needed a farm with horses “for the kids”. 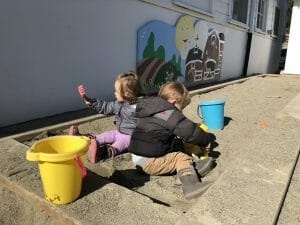 We played at the sandbox for quite some time. It was so nice to sit in the sun! They probably could have stayed here for hours.

When they had their fill of the sandboxes we searched for our next animals. We found a large pig resting inside the shed attached to his corral (no pictures unfortunately – it was too dark inside), and some goats in the pasture next door.

There were also some cute little animal benches by the goats that the kids had a great time climbing on.

We finally made it to the barns! One barn appeared to have a room in it (I’m going to assume that’s the activity and party room) but was closed.

Right around the barns there are some farm question boards that are great for preschool aged kids. We explored these for a minute before heading into the barn. 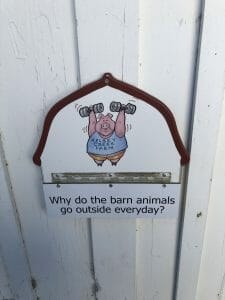 Most of the animals were outside, but there were short bios about each of the horses on their stall doors. At the end of the barn we found bunnies and chickens, and a few visiting pigeons!

Next, we walked along the side of the barn toward the historic Fraser Cabin. Between the barn and the cabin is a little play area with a tractor toy kids can climb on. Then we walked down the hill so we could visit the playground.

There was more exploring of the open spaces, trees, and even some mud along the way to the playground. 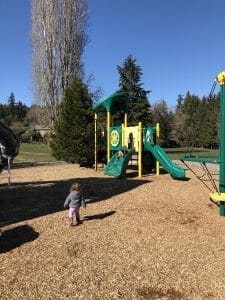 The playground has some really great play structures. The barn play structure is for bigger kids with ladders, a second story and taller slides. The tractor play structure was more geared toward younger kids. There was a really cool swing at the park (picture a big platform that multiple kids can sit on) and a spinning toy with a lot of handles that kids sit on.

The kids and I played here for a while and enjoyed the lunch we brought with us. Then we began the trek back to the parking lot. Along the path there were some rocks had “climb on top and jump down from me” written all over them! The picnic tables were climb-worthy as well. Amazingly, no children asked to be carried in the entirety of this adventure!

Is it worth the drive?

Totally! My kids and I had an amazing day exploring Kelsey Creek Farm and Park. It can be difficult to escape the daily hustle and bustle of a large metro area sometimes, but I immediately felt more at ease surrounded by nature. In addition to the trees and greenery it could possibly been the fact that my kids could get out and RUN without me having to worry about cars, crossing streets, etc. Or that it was a three hour period where I didn’t hear the word “mom” 5,347 times! Whatever it was, the slower pace and open spaces were amazing and greatly appreciated by us all. 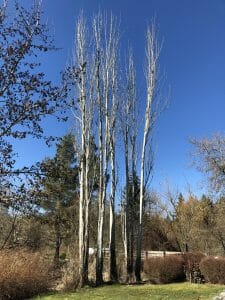